In this post, I continue talking about positive symptoms, in particular, thought disorders. These include things like making loose associations, trouble organizing thoughts or connecting them logically. Additionally, garbled speech, something called “thought blocking”, and making up meaningless words. What is having a thought disorder like? I’ll try to answer that here with multiple examples.

Many of these symptoms are probably noticeable by anyone who has interacted with me. After some thinking, I realized that while I do suffer from these symptoms, I also suffer from lacking insight. Lacking insight is a cognitive symptom that prevents schizophrenic people from knowing when they’re having symptoms. However, recognizing that lack of insight allows me to pay more attention to what I might be missing. Eventually, I noticed enough symptoms to be able to write this post.

The first thought disorder I mentioned, making loose associations, is something I find myself guilty of numerous times. However, I did it so often, I just assumed this was simply how peoples’ minds worked. After doing a bit of research, this turned out not to be true.

Even so, it may be true for some people. Or, even true for everyone in isolated incidents. However, I believe it happens more oftent han it should with me. When I say “making loose associations”, imagine yourself playing the “word association” game with someone. As some examples, when they say, “Cow” you say “milk”. When they say “water,” you say “ocean”. When they say “sun,” you say “bright”.

As a schizophrenic person, the associations may not make sense at first, or at all. Say you’re playing this word association game with a schizophrenic person and you both have a friend named Paisley. For fun, you say “Paisley” to see what the person thinks of your friend in one word. They respond with the word “Oven”. It seems pretty bizarre, but when they explain it to you, it’s because Paisley rhymes with pastry. Pastries are baked in an oven. In this case, that actually happened when someone asked me what our friend’s name was. The only name I could think of was “Oven” even though I knew that wasn’t actually a person’s name.

Another thought disorder includes troubles organizing thoughts or connecting them logically. This is certainly another symptom I have trouble identifying in myself. I am so used to organizing my thoughts in such a disorganized fashion that it seems normal to me. I really tried hard to think of an example, but I can’t come up with anything. It’s sort of like asking a blind person who has been blind since birth to describe a color. It’s simply outside of their ability to perceive things. Perhaps now that I’m more aware of it, I can discern my thought organization between when I’m healthy and not. I’m relatively healthy right now, however, and I hope to stay this way indefinitely. So for my sake, I hope I am never able to give you an example.

Garbled speech is another thought disorder, one which has afflicted me quite often. However, I have been fortunate enough for it not to have adversely affected very often. It happens most often when I haven’t thought of the words I want to speak ahead of time. Although, in more recent years I’ve found myself putting pauses in my speech to compensate for that. As a result, my speech isn’t as garbled. However, I am very often interrupted mid-sentence in conversations with people who don’t know me well. They’re not trying to be rude. Instead, they simply think I am done speaking. It can be pretty frustrating because, in my opinion, I sometimes have very profound things to say!

What is it like having thought disorder with speech?

An example of my garbled speech that stands out the most is when I was working at a liquor store. I had a penny-pinching customer arguing with me about the price of something. I’m always very calm when explaining prices to customers. However, while I was dealing this with this particular customer, my garbled speech had taken over. This resulted in him seeing it as a sign of weakness. He tried to take advantage of that by attempting to bully me into getting his 30 cents off. So in instances like that, this symptom can be pretty frustrating to deal with.

Making up meaningless words when trying to speak has never been an issue for me. Although, I have found myself speaking in neologisms as a way to entertain myself when I’m bored. I eventually turned aspects of this into my art project called Curious Markings. With this particular symptom, I’m “sorry but not sorry”. Sorry, I don’t have any examples for you because it’s not a problem for me. Not sorry because I’m glad I don’t have to deal with this sort of problem in my everyday life.

If you’ve made it this far, you may be interested in my other posts. In them, I describe my psychotic symptoms from my schizophrenia. I talk about symptoms like delusions and hallucinations.

PrevPreviousA Brief Introduction to “How I Experience …”
NextWhy are schizophrenics lazy?Next 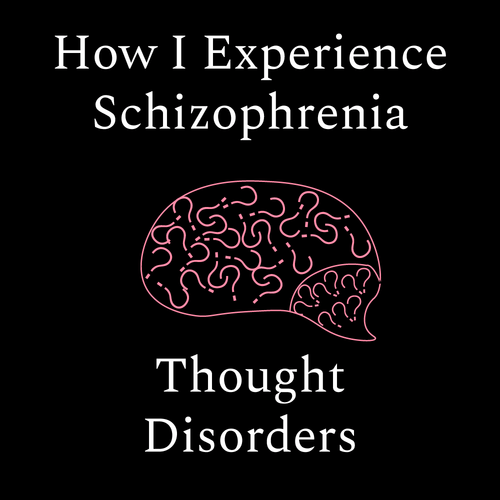