Hallucinations are hearing, seeing, tasting, feeling and smelling things that aren’t actually there. Out of all hallucinations that exist, the most prevalent symptom is hearing voices. When I hear voices, I generally hear them as a cacophony of whispers. Occasionally, a loud voice will shout amongst the whispers that will sort of jolt me back into reality. After that loud voice shouts, the whispers will go away for a while. Hearing voices becomes most noticeable when I’m going to bed. I think this is because there aren’t real noises or thoughts to distract me from the whispers I would have normally heard throughout the day.

I can rarely discern what the voices are saying. The only time I can make out what is being said is when one of the voices shout. Although, when the shouting happens, 80% of the time or more they’re just yelling my name. The most common shouting voice I hear is in my grandfather’s voice. In reality, my grandfather never yells. I’ve never once heard him raise his voice, let alone show any sort of hostility. I’ve never viewed my grandfather in a negative light. I think that when I hear his voice, maybe hearing it calms my nerves. It sort of relieves stress which subsides the other voices. It seems my grandparents have always been a positive part of my life, even when I’m hallucinating their presence.

It’s actually quite rare for hallucinations to be positive. As a Tourette’s syndrome sufferer only yells expletives instead of compliments, a schizophrenic person typically has hallucinations and delusions that are unsettling in some way or another (I describe what having delusions is like in this post – click here).

Outside of voices, I’ve had plenty of other hallucinations. My most common hallucinations are through smell and taste but mostly smell. I will often smell smoke which will feed a delusion that the house is on fire. I often find myself systematically going through the house to make sure nothing is on fire. Sometimes it works out in my favor, however; another symptom of schizophrenia is inattentiveness. Sometimes I might forget to turn off the burner of the stove. I’ll find out soon after due to my paranoid delusions and hallucinations.

Hallucinations and delusions can go hand-in-hand

As far as delusions of taste go, I often think that people are spiking my drinks (an activity common in date rape crime). It’s completely irrational, but the thoughts are there nonetheless. So if I’m getting a coffee from a coffee shop, sometimes I’ll taste liquor for the first sip until I sort of collect my thoughts and rationalize them away. Generally, once I make an effort to rationalize why I’m experiencing something like this, I can go on with my normal way of going about life. This is not just true with hallucinations, but most of any symptoms I have.

At the times that I have visual hallucinations, it’s sometimes extreme. The most common visual hallucination I had was when I was working at a liquor store. When you work at a liquor store you end up dealing with a lot of unsavory people, mostly alcoholics and shoplifters, or shoplifters that are alcoholics. Dealing with these people takes a toll on you mentally. You may not notice it, but it happens. I didn’t notice it, but the stress from it manifested in an increase of psychotic symptoms, one of them being visual hallucinations of nuclear bombs being detonated in the city I was living in. Again, like many of the symptoms I experience, I had to make a concerted effort to rationalize away these experiences. 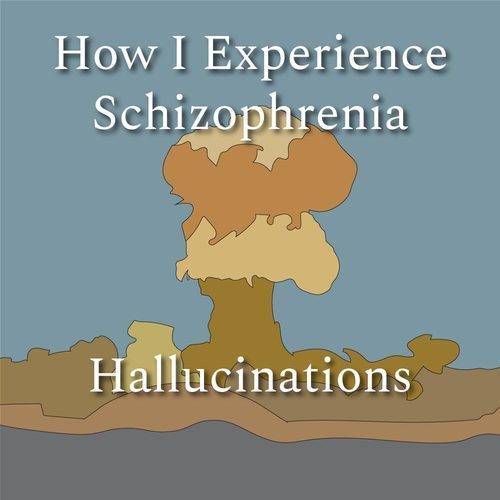