Delusions are also a ‘positive symptom’ and, like hallucinations can be very disruptive to a schizophrenic person’s life. A delusion is defined as false beliefs that are not based in reality. In other words, it’s believing something that isn’t real, mostly due to an inability to separate real from unreal experiences. When you hear about schizophrenic people and delusions, you may ask yourself, what is having delusions like?

Delusions can often go hand in hand with hallucinations. When I hear voices, I usually know that they’re not real. When I have a hallucination that is uncommon, it can be paired with the delusion that the hallucination is real. If I hallucinate a nuclear bomb going off, I am likely to believe it actually is a bomb being detonated. This is because the visual complexity of the hallucination can make it harder to rationalize away. I can eventually rationalize these delusions and hallucinations out of my focus, but it takes a high level of concentration.

My delusions often transform themselves into various things. I wonder if they manifest in certain ways based on certain circumstances. Perhaps they simply change between the levels of my mental health, good or bad. For example, when I’m not doing well, I’ll have one certain delusion. Then, when I start to get better, it goes away. When I start to suffer from symptoms more frequently again, the delusions seem to change into something else. As an example, for a long stretch of time, I had zombie delusions. Then, I got better. Then, I got worse. But, my delusions didn’t go back to zombies. Instead, I became convinced that I had heart disease.

I remember my first noticeable delusion being that I thought my mother was poisoning me when she made food. This, humorously enough, was very hard to rationalize in my mind, because cooking was never her strong suit. She could barely make a hamburger helper meal (no offence, mom!), let alone concoct a poison to put in it. Not only that but like all my family, she has been very supportive in every way imaginable. Subsequently, having delusions where she wants to hurt me is pretty far-fetched. I would have to be incredibly ill to succumb to them, which thankfully never happened. For another example, read this post where I describe a delusion that can be extremely difficult to sort from reality.

In another post, I already talked about my hallucinations of nuclear bombs. However, I will quickly acknowledge that my delusions did play a part in making those hallucinations particularly intense. Shortly after those hallucinations and delusions subsided, I started having delusions that zombies were wandering outside of my house. I would close all the blinds to my windows in my house. I was convinced if they saw movement inside, it would provoke them into breaking in and wreaking havoc. This was probably one of the most troubling delusions I have had. The nuclear bombs made the moment of panic last 10 to 20 seconds. With the ‘zombies’ delusion, it was much more drawn out. I had an incredibly hard time sleeping. I would make sure the doors and windows were locked so many times you would think I had obsessive-compulsive disorder. That said, my doctor told me that OCD behaviors can happen in schizophrenic people sometimes.

One of the delusions that have lasted for several years. It was thinking that if moonlight entered my room, it would act as a beacon for aliens to abduct me. Again, like the zombies, very often I would have my blinds closed. If my room didn’t have blinds at the time, I would always avoid looking out the window. I was afraid if they were outside watching me and I made eye contact, they surely would take me. Another multi-year delusion I have is whenever my ear gets itchy, I think it’s alien bugs crawling inside my ear. I would think that the bugs will get inside my brain and control my mind. Every time I felt an itch in my ear I would always push on my ear. This made me think I was crushing anything that was trying to crawl inside. 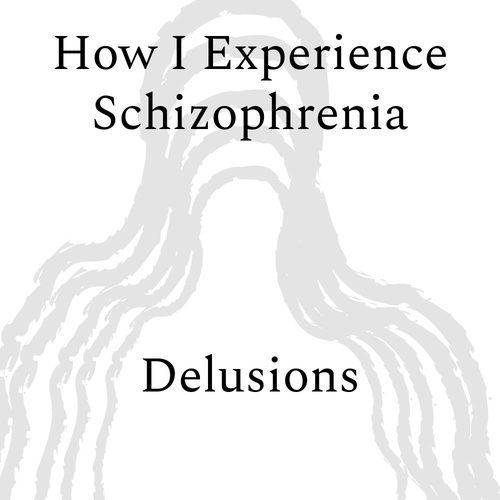